This past weekend the nostalgia bug bit me and I reinstalled Diablo 2 and its expansion Lord of Destruction.  I started a new necromancer in the online ladder and rushed him from 1 to 70, landing myself in Act 1 Hell by Saturday afternoon.  While I had a blast power leveling and re-experiencing Diablo 2, I came to realize that the path I chose was not a healthy one.

You see, when you just rush to the end and max out your skills, you’re typically left with not so great gear.  Then, when you can’t find a game to rush you further, you’re somewhat stuck.  There are entire parts of the game that you skip on your way to a quickly leveled character, and that isn’t what Diablo is about.

What I hope to do with this new Let’s Play series, Cain’s Journal, is chronicle my single-player, offline adventure from Act 1 Normal to Act 5 Hell.  It will be a long road – a road I admittedly may not finish – but the summer gaming release schedule is going to be easy on my wallet, so I’ll have time.

Starting things out, I decided to reroll a Necromancer.  They aren’t as gear dependent as other classes in the sense that certain Necro builds don’t require your character to do any physical damage.  Instead, you can summon a horde of minions to dish out pain for you while you sit back and use curses, corpse explosion or poison nova.

One of the cool things about playing offline is that you can manually adjust the player count, even when playing by yourself, to bump up the item drop chance.  As a tradeoff, enemies have more health and hit harder, but they also grant more experience.  As soon as I stepped out into the Blood Moor I pumped the difficulty up to an 8-player game and went to work.  Gems began raining from the sky and I was level 6 or 7 by the time I cleared the Den of Evil.

Since then I’ve fought my way through the Cold Plains, defeating Blood Raven and picking up a rogue mercenary to compliment my five-skeleton army.  I traversed the Underground Passage, grabbed the scroll in the Dark Wood and opened up the portal to Tristram in the Stony Field.  Having rescued Deckard Cain, I now have my sights set on the Countess in Black Marsh.

Though I haven’t seen too many spectacular drops (I’m still in early Act 1 Normal, after all), I was able to purchase a Necromancer wand that granted +3 to Skeleton Mastery and early access to Corpse Explosion.  I also found a Preserved Head that bumped both Skeleton Mastery and Raise Skeleton up by 1, so I’m feeling pretty overpowered at the moment.  Even with the player count set to 8, I’m steamrolling everything in the area.  That said, I made it to level 15 and I’m only halfway through Act 1.  Hopefully I’ll be able to reach Act 2 by this weekend… next time! 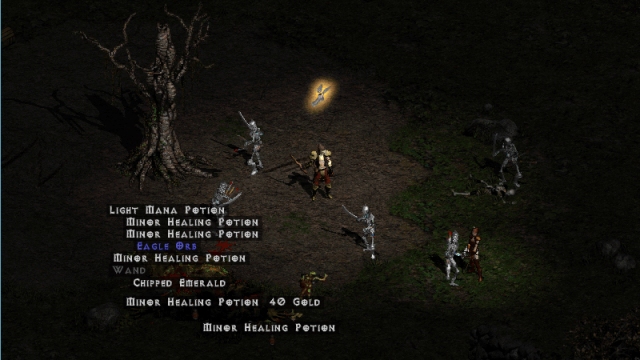 Nuzlocke Moon #2: See You In My Dreams